ACCA （アッカ） is a unique organization that has been separated from the central parliament. Police station, fire department, and medical stations is under the ACCA headquarters. The 13 wards have different uniforms.


ACCA has been named after the bird ACCA which was the symbol of peace that became extinct a year before it was created.

The ACCA inspection department was established to watch over the daily operations of the various ACCA branches from each ward. This is due the fear of operations going out of hand in each ward.

It summarizes the data of all events that takes place within each of the 13 wards and is sent on the headquarters via leased line. On each ward, there are 10 headquarters office staffs in order to prevent injustice by creating conspiracy with a local staff of the inspection department. That is one of the purpose of having a representative from the headquarters, to manage the local staff and prevent conspiracies.

The branch chiefs are those in charge of their respective ward's ACCA branch. 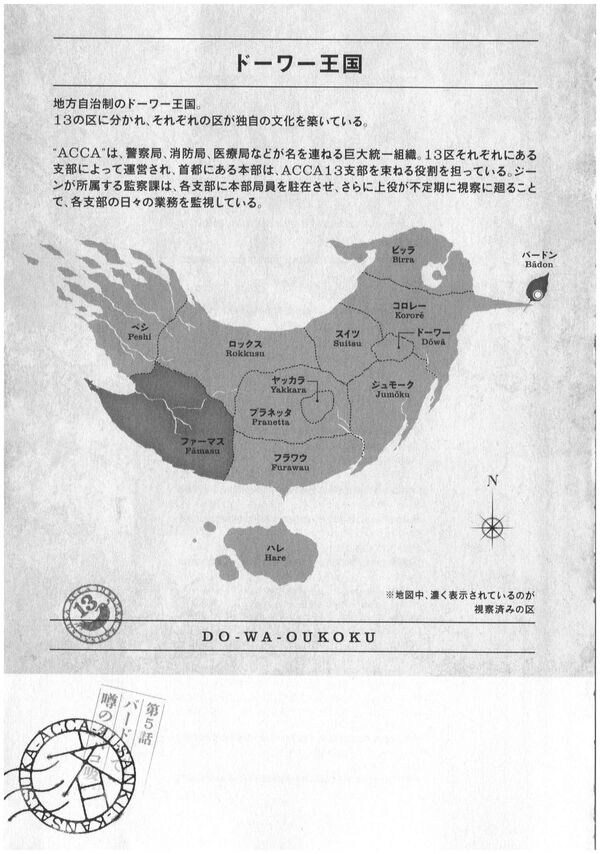 Bãdon (バードン, Bādon) is the easternmost ward. A metropolitan city located at the Eastern end of the country ( at the beak of the bird). Bādon branch have a higher salary than the headquarters. The building of the Bādon branch and the headquarters are adjacent to each other.

Fãmasu (ファーマス, Fāmasu) is a ward is located at the southwest of the country (around the bottom of the bird). Fāmasu ward is responsible for 90% of the country's agricultural industry. The prices are very cheap and has the lowest crime rate of the 13 wards.

The ward is located at the southeast of the country (around the chest of the bird), adjacent with the two peninsulas. The average height of the population is 2.5 due to reforms of the agricultural revitalization and improvements of agricultural products, the size of foods content is also 2.5 times larger than of the other wards and the cuisine are also mega size and hence, over-eating has become one of the present problems for ACCA staffs in this ward.

The ward is located in the north of the country surrounded by Kororẽ, Dõwã, Jumoku, Pranetta, and Rokkusu. It is its own independent nation as the nobles wish for the nation to abide by the old and traditional ways. Hence, there is limited communication for the branch of headquarters, photography, dining and shopping. Traveling back and forth to other wards have also been limited. Commoners have been issuing complaints and even attempted coup d'etat but ACCA's aristocrat staffs covered them up due to some senior nobles. Most of the lower rank ACCA members are commoners while the higher ranked are nobles.

The ward is located in the northeast of the country with a lake that flows from the sea. The lake is the part of the eyes of the bird, a the western end of the ward creates a crest. It is the coldest ward. Since the climate is severe and the wheat doesn't grow, the staple food are potatoes and rye bread. Production of barley and brewery, but mostly exporting. Not as abundant as Fāmasu but the production capacity is enough to compensate for living.

The ward is located in the north of the country (at the lower back of the bird) the hometown of Grossular, the ACCA chief with white long-hair. It has been noted than Rokkusu men like to leave their long and most of them have whitish hair like Grossular. When a train accident had occurred by the next Peshi ward boundary 13 years ago, the Peshi half of that departure station didn't want to shoulder responsibility and so the Rokkusu ward carried the whole responsibility to avoid a quarrel with Peshi ward. Japanese National Railways joined in a subsidiary in ACCA by effort of Grossular which is a branch chief at that moment.

Hare is an isolated island ward off Furawau, at the southern tip of the island. It is the ward of longevity, with most elderly ACCA members being 91 years-old and still working vigorously. It has a mild, tropical climate as the ACCA members there wear short-sleeved t-shirts and shorts. The residents there are bright and cheerful.

The ward is located at the inland area encircled by Kororẽ, Suitsu and Jumõku. This is the ward where royalty lives. The inhabitants of the ward are fond of cleanliness and like beautiful things/beings. It is famous for its simple, rustic cakes, most notably the walnut cake.

It's located in the south of Birra, across the neck of the bird and the bill. Women have high status and respect in this ward and hence, there are a lot of female executives in the branch.

It is located approximately in the center of the country.

It is the double inland districts located in Pranetta.

It's located in the northwest of the country, with a lot of islands (the tail of the bird). It is in contact with Rokkusu and Fãmasu.

It's located in the south of the country (the belly of the bird). Pranetta to the north, Fãmasu to the west, and Jumõku to the east. It is a wealthy ward, able to support the country with its vast minerals and agriculture. This ward also has a lot of beautiful flowers. The controlling family in this ward is the Lillium family, who owns a white, Arabian palace-like estate. Most people in this ward have dark skin.

Community content is available under CC-BY-SA unless otherwise noted.
Advertisement